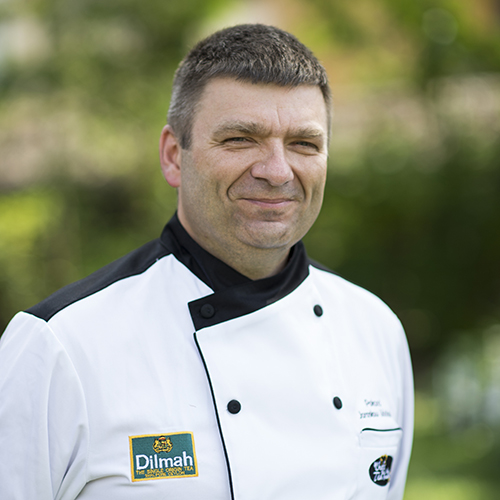 The vice president of OSSKiC (Polish Kitchen & Pastry Chef’s Association) since 2009, Jarek Uscinski’s passion is to understand and experiment with food and flavours. After a stint in the military he studied and became enthralled by the magical of the world of gastronomy.

Jarek is a happy husband with a daughter and a son. Taste is his passion. He loves playing and experimenting with food and he intends to create a very special relationship between cooks and guests, so that when a guest’s enjoyment brings truly satisfaction to the one who creates it.

A product of the gastronomy school in Poland Jarek found a job as a chef in the most famous Greek restaurant Parnas in Warsaw. From there he moved to Bristol Hotel where he eventually served as a chef of the Marconi Restaurant. After five years he left to  Resta99  which was ranked as one of the ten best business restaurants by European Wall Street Journal as its chef and Board Member. For the last 8 years he has been creating experimental dishes at his Moonsfera Restaurant as chef and owner. He has also made a number of TV appearances during the course of his career as a culinary professional.

As a child Jarek dreamt of becoming an artist or a graphic designer. Today he lives that dream as a culinary artist, an innovator designing masterpieces in his kitchen with flavours and food.