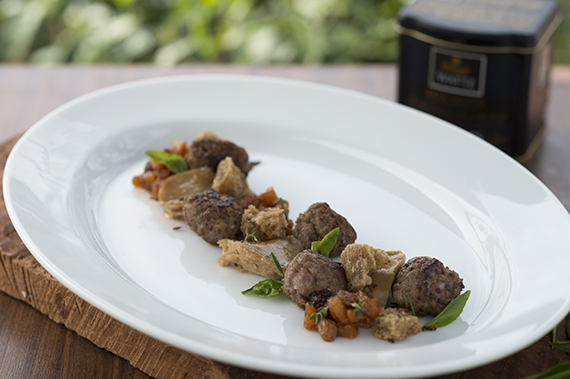 Yatte Watte and sweet corn custard:
Coat the sweet corn ears in the olive oil and tea and grill for about 15 minutes or until cooked through.Strip the kernels off the corn and set aside to cool.
Preheat the oven to 17 degrees C. Melt 1 tablespoon of butter and brush the inside of 4 rectangular moulds or ramekins.
Melt the remaining butter in a large frying pan over medium heat. Add the onions and cook until soft and translucent, about 8 minutes. Set aside
Lightly beat the eggs in a large mixing bowl, stir in the cream, milk, nutmeg and pepper to taste.
Stir in the corn. Blend and pass. Divide the mixture amongst the moulds or ramekins and top each with a little onion.
Bake the custards until set, for about 25 to 30 minutes. Allow to cool before removing.

Frikkadels:
Heat the oven to 180 degrees C.
Pour water over the bread and set aside to soak.
Fry the onions in the butter stirring regularly for 10 minutes until they are soft and starting to colour.
Add the garlic and lamb mince, stir well. Crush the mince into fine grains until it changes colour.
Stir in the curry paste, herbs, spices, chutney, sultanas and bay leaves. Season to taste with salt and freshly ground black pepper. Cover and simmer for about 10 minutes.
Squeeze the water out of the bread and beat into the mince mixture.
Divide the mince mixture into frikkadel balls.
Heat olive oil with a little butter in a large non-stick frying pan and gently cook the frikkadels until cooked all the way through, about 12 minutes. Be sure to move them around so they don’t stick or burn.

Croutons:
Preheat the oven to 165 degrees C.
Place the bread in a mixing bowl, drizzle with butter. Sprinkle with the herbs and seasonings.
Arrange in a single layer on a baking tray and bake in the oven for about 15-18 minutes, occasionally turning until golden brown.

Tea and sherry soaked sultanas:
Combine all the ingredients together in a large mixing bowl.
Cover and allow the sultanas to sit in the liquid overnight.

Chutney:
In a small sauce pan sauté the red onion for about 5 minutes until soft.
Add the mixed spice and chilli flakes.
Add the sultanas, cider vinegar, sugar and soaking liquid. Stir everything together well.
Bring the mixture to a simmer and allow to cook for about 1 hour, or until the chutney has thickened to the correct consistency.