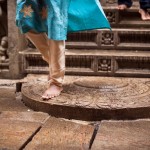 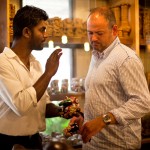 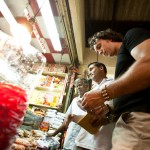 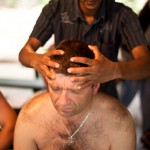 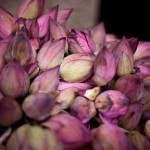 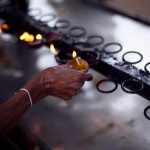 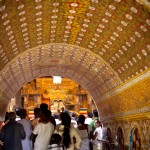 A day on the move, the team started the descent from the quiet, misty hills to the noise and crowds of Colombo. Kandy, where they stopped en-route was a fusion of old world charm, quaint markets and the bustling throngs.

The city, which was the last kingdom of Sri Lanka is steeped in history and culture. The quiet lapping of the water of Bogambara Lake with its typically Kandyan decorative white wall and the lush greenery that surrounds the lake creates a feeling of serenity, enhanced by the occasional beat of drums of  and the unmistakable pipping of a horanewa  from the Temple of the Tooth Relic. Considered most sacred and worshiped by hundreds and thousand of Buddhists every day the city revolves around the magnificent palace where the Lord Buddha’s sacred tooth relic presides. The team visited the Temple joining the crowds with their offerings of flowers, incense and oil lamps.

Next followed a bit of tender loving care for some at the hands of an expert ayurveda practitioner. Ayurveda is an ancient healing art that uses various herbs and oils for curing illnesses as well to promote general wellness. The others were busy seeking retail therapy as they hunted for bargains among craft shops that lined the city streets. By nightfall the team was back in Colombo to rest and be ready for the last few days of the progranme.